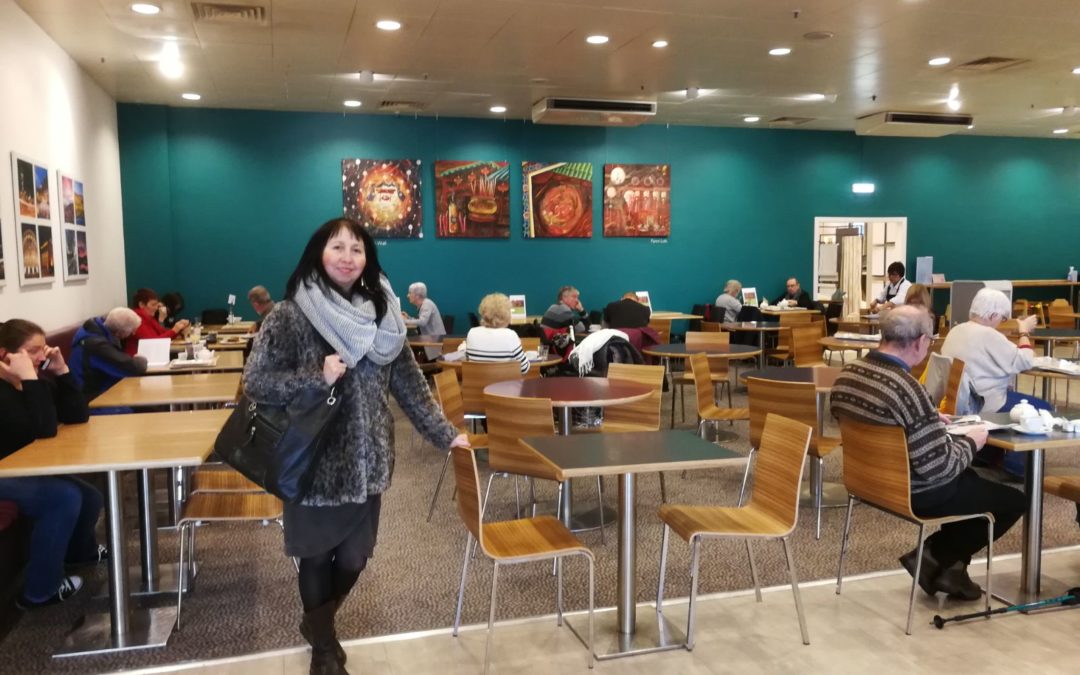 As a creative entrepreneur, I draw on my maternal and paternal grandmother’s lines who collectively migrated to different countries for work, spanning China, Africa, Malaysia and the U.K. I was born in London. At 7, I won a scholarship to a local arts school but with regular school work my creative writing took a backseat. My secondary school acknowledged my Art School attendance but firmly guided me into the vocation of social work. Four years later I graduated as a Qualified Social Worker with a B.A. in Applied Social Studies and was straight into a job.

Maternity leave gave rise to the space to reconnect with my love of art, taking various arts courses including a Mature Access course in Art. My portfolio gained me a place on an Art degree, which I juggled whilst being a single parent. My dining room and floor became my studio. Whilst working on my final project, based on ancient China, my Chinese grandparents died within weeks of one another.

When I graduated my art degree I knew I had to make a major shift in my life to keep creativity at the centre. Earning some extra cash at a community environmental charity, I saw the potential to combine my people skills with my artistic skills. My creativity flourished running arts environment clubs for children. In 1999, I met an arts co-ordinator of women’s art exhibitions in Malaysia who invited me to exhibit in Thailand, along with three Thai Princesses! 3 years later I organised an international women’s art exhibition and conference in Sheffield, with artists from 9 countries.

Persuaded by a random meeting with a fellow conference delegate, I applied to do the MA Art as Environment at university, where they instantly understood my live art practice from the inception of my idea/vision to the engagement of others to the event. This was very helpful to me as an artist as by now I had initiated a Multicultural Festival that thousands attended annually. 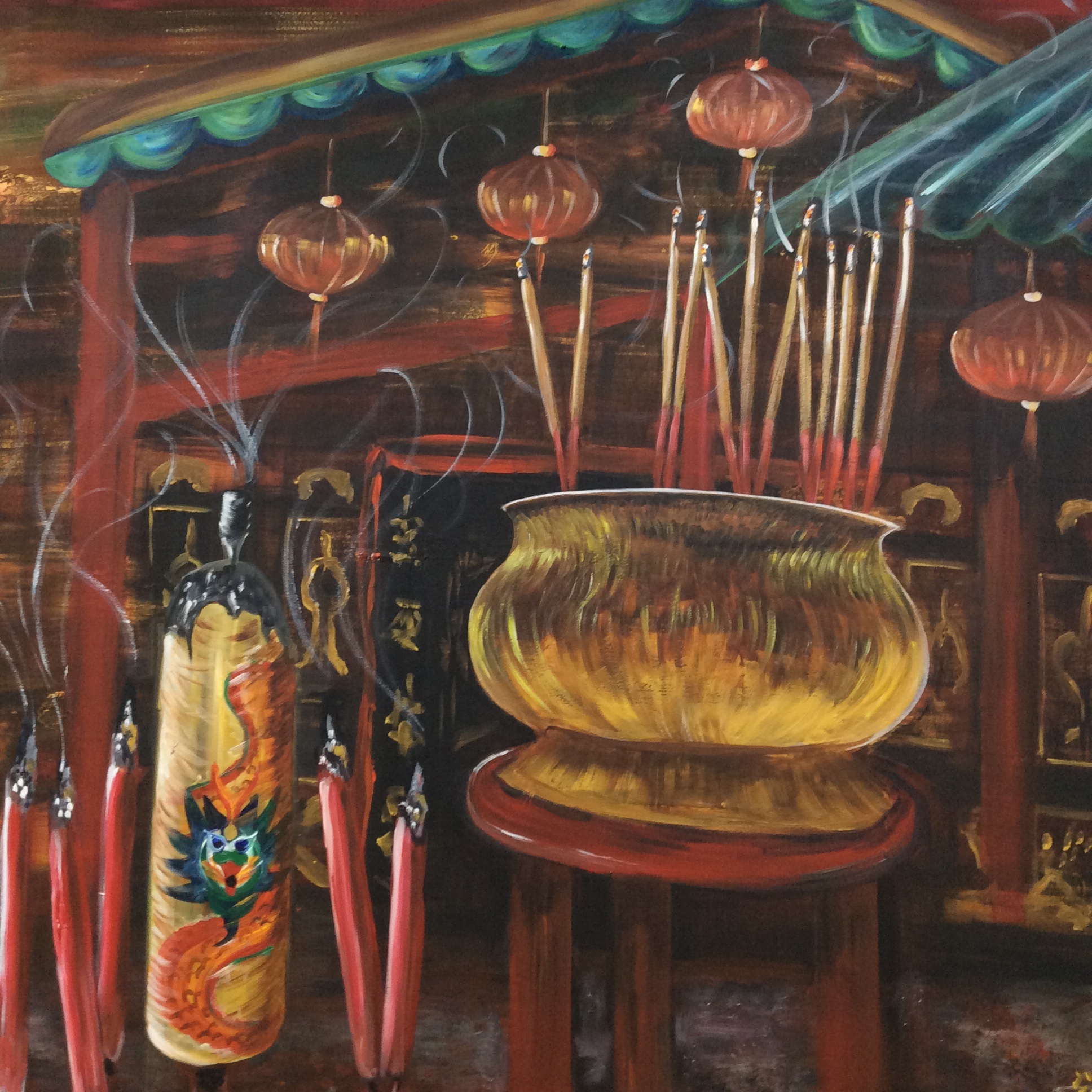 In 2004 I was granted a bursary place on a PhD in Art and Design at Manchester Metropolitan University. Initially, I had the fun of interviewing other British Chinese artists, lots of reading and writing and still had time to lead workshops, paint and exhibit. It is fair to say though that in the last year of my PhD I had to withdraw to craft and shape my doctoral thesis as well as a Live Art exhibition-East-West, Spirit, Earth funded by the Arts Council England. In the spring of 2010 I was awarded my doctorate and had exhibited in Australia, South Korea, China, Malaysia and India.

Graduating from my doctorate, I knew I must paint more so after completing an arts project with refugees in Barnsley I exhibited the group piece, film  and my own art in the U.S.A. which I mailed the work to, but didn’t attend as my mother became seriously ill and later passed over. The sad death of my mother gave me a greater need for reflection and on the strength of submitted creative writing I’d had as a break from my thesis, I got a place on the MA Creative Writing at Sheffield Hallam University.

The following years I was invited to exhibit in Vietnam, Russia, Mongolia, Hong Kong, Taiwan and have just come back from exhibiting in Malaysia as part of a Thai-Malaysia collaboration that I was invited to exhibit in in 2017. I’ve also continued to write and in 2019 had a short story in an anthology published by University of Bradford entitled The Living and The Dead.

I have found a symbiotic relationship between painting and writing and I can cross train my skills such as in 2018 holding a live art event-A Seat at The Table –afternoon tea the Sheffield way in my current part time role as Co-ordinator for Cohesion Sheffield.

As an entrepreneur, one has to have passion but to be innovative, resourceful and learn to take risks. Most of all, one has to be persistent which bring success through overcoming challenges and brings resilience which helps in one’s life overall. To end this part of my story I thank my mother and grandmothers before me.

This website uses cookies to improve your experience while you navigate through the website. Out of these, the cookies that are categorized as necessary are stored on your browser as they are essential for the working of basic functionalities of the website. We also use third-party cookies that help us analyze and understand how you use this website. These cookies will be stored in your browser only with your consent. You also have the option to opt-out of these cookies. But opting out of some of these cookies may affect your browsing experience.
Necessary Always Enabled
Necessary cookies are absolutely essential for the website to function properly. This category only includes cookies that ensures basic functionalities and security features of the website. These cookies do not store any personal information.
Non-necessary
Any cookies that may not be particularly necessary for the website to function and is used specifically to collect user personal data via analytics, ads, other embedded contents are termed as non-necessary cookies. It is mandatory to procure user consent prior to running these cookies on your website.
SAVE & ACCEPT