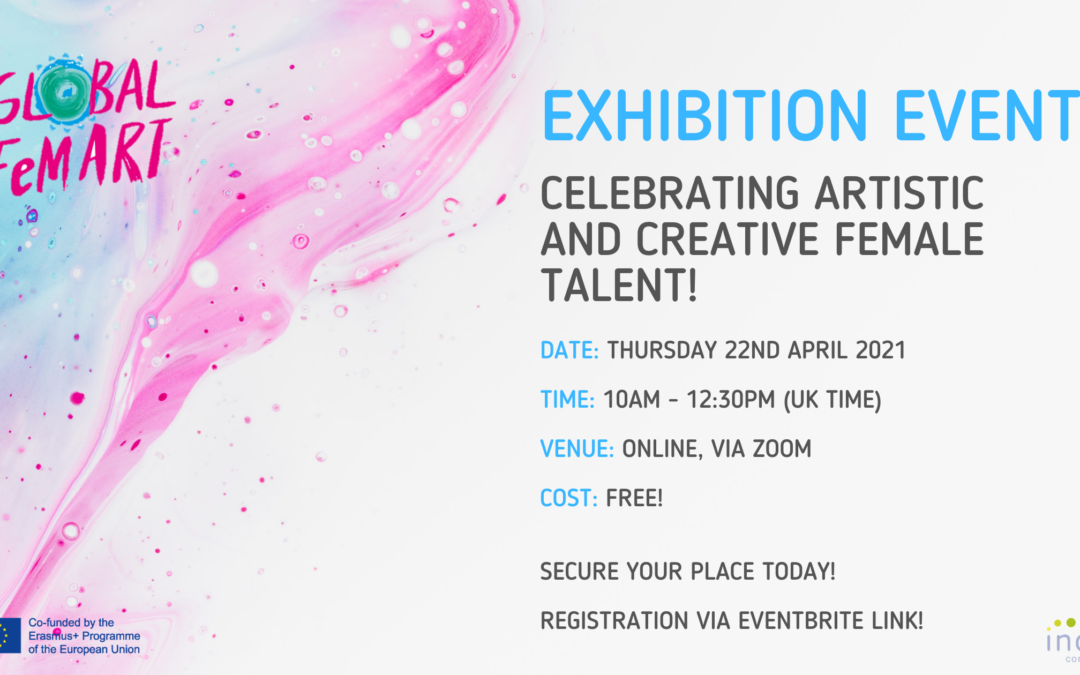 Come and celebrate all things artistic as we come together to explore creative businesses and listen to inspirational women!

The logistics of The Global FemART Exhibition Event has been finalised and we cannot wait for you to be able to experience and learn from all the great features this event has to offer. At this FREE online event you will have the wonderful opportunity to view exhibitions from amazing female artists and creatives which promises not to disappoint and will prove to be a spectacle for all those in attendance. Following this event, you will also be able to download a FREE exhibition booklet presenting the work of several artists and creatives allowing you to view these excellent pieces of art within the event and whenever you desire in the future.

Further to gaining a glimpse of so many wonderful pieces of art, you will also be fortunate enough to experience the stories of amazing guest speakers and their journeys into creative business ownership; a truly inspiring experience and one which will certainly prove crucial if you hold similar ambitions!

Not only is this a brilliant opportunity to celebrate female art and creativity but also a marvellous opportunity to support our Global FemArt project which aims at creating conversations about the gender inequality and underrepresentation of woman in creative fields by inspiring and coaching more women towards taking the leap into globalised trade and helping to bridge the creative sector’s gender gap.

Further to the amazing experiences outlined above, we believe our exhibition event could prove as an amazing event to launch networking for all – with potential to meet with other exceptional creatives in attendance. Following the exhibitions and guest speakers, 30 minutes of networking time is allocated for you; an excellent opportunity to connect with others whom you may choose to collaborate with in the future or to praise the work of the artists and creatives in attendance.

We look forward to seeing you at our unmissable exhibition event and we are excited for everyone to be able to benefit from this wonderful experience together.

Don’t miss out; register for your free place today: https://globalfemartfinalexhibition.eventbrite.co.uk

Details of the event

Women as leaders are known for their empathy, consistency and encouraging staff to collaboration. Additionally, women who happen to be artists are full of creativity, high self-esteem as well as open-minds.

Art enables us to share thoughts, visions and ideas that may not be able articulate in any other way. The skills gained through practising art can be used in creating businesses of your own.

As a good example, we could give a figure of a great female entrepreneur, Sylwia Dąbrowska.

Dąbrowska is a theatre instructor, drama teacher and graduates from The Academy for Theatre Practices in Gardzienice. Under the nickname „Teacherka (http://teacherka.pl/o-mnie/)”, she prospers as an adviser for people who are bound to start their journeys as stage performers or in front of cameras.

Due to her over 12 year of experience with theatre, she’s able to help those, who suffers from stage fright or just lack in the knowledge of a „proper presence” on stage or via video live. Except for offering online courses in the field of camera presence and fighting stage fright, she creates mentoring plans for growing businesses.

Sylwia Dąbrowska is an illustrative example of a female artist, who was able to billow her artistic experience into a developing business.

Art made by women

Social roles have been around for centuries, despite the tremendous progress our society has made in recent decades, they still have a huge impact in today’s job market. In particular, it is women who face constraints in their ability to advance in their careers, the so-called „glass ceiling phenomenon”.

The phenomenon that, due to systematic barriers, low representation and mobility, and ever-present stereotyping, prevents women from advancing to higher positions. This fact affects almost all women in the market sectors, especially female artists and those working in the creative sector. According to the report „A poor chance of promotion?” Published by the Katarzyna Kozyra Foundation, there are far fewer women than men employed at Polish art academies. This is surprising because women are the overwhelming majority of students in the above-named universities. This barrier is due to long-standing historical beliefs; the childcare and eldercare duties they perform. Employers persist in the belief that hiring women (especially in higher positions) risk their decision to become mothers, and thus to abandon work for the family. Also, this reason affects their situation in the artistic community. Buyers, when deciding to purchase a piece of art, pay attention to „who they are buying”. These transactions are often treated as further investments rather than acts of admiration for the art and its author. Therefore, they ask themselves, how long will this painting/ work be significant? Worth it? The „danger” of buying works from female artists is again –  motherhood.

In recent years, the situation is fortunately changing. Many Polish museums and galleries choose to present female art. The question, however, lies in the essence of this change – is it just another „feminist and women liberating” trend, or is it a real change that has a chance to change the face of Polish art? Agnieszka Mese, an art consultant, currently helping women artists take their first steps in the industry, responds (from an interview by Anna Macioł-Holthausen, „Women’s Art Still Underestimated?”): „For now it’s just a trend, we’ll see if it continues”. She assures us that this is a step in the right direction, we just need to keep an eye on the situation and do everything we can to make sure that women finally start being treated equally to their male artist colleagues. Despite many changes, female artists are still rarely exhibited, entire exhibitions are rarely dedicated to them, and awards and competitions still go more often to men.

The popular belief that says: “the real artists ought to be poor” to appreciate the real virtues in life does not help the situation of female artists either. They are expected to exhibit their work for free or take part in unpaid internships for the belief that an artist’s work is not a job but above all – mission. Therefore, specialists support institutions and measures are needed to protect artists and women employed in the cultural sector from unfair treatment by their employers and contractors. Also, as a society, we should fight gender inequality at all career levels in every sector of today’s economy. If we get rid of all the stereotypes created for the so-called „gender roles” the situation of women artists in Poland and Europe will change significantly.

We are at a crux in history where conventions are being challenged and expanded. After years of racial and gendered struggle, black women are beginning to gain appreciation for their artistic talent and discriminatory struggles they have overcome to achieve these, that history had attempted to conceal.

Of these women was Augusta Savage (1892-1962), painted as ‘one of America’s most influential 20th-century artists’, whose work consisted of a diversity 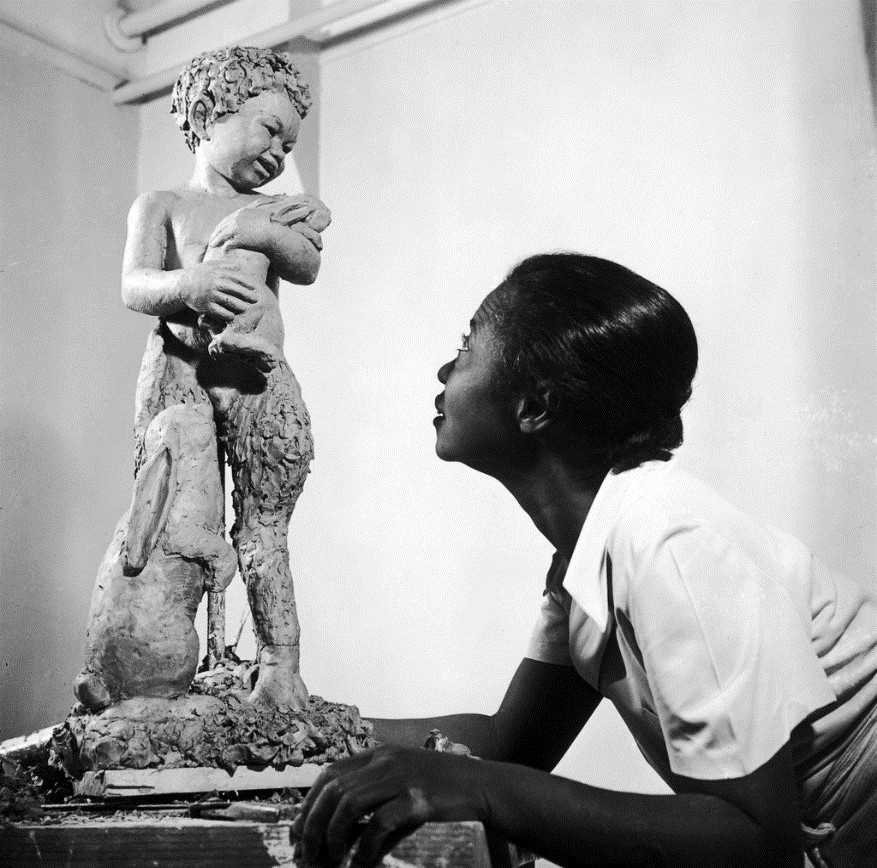 of striking sculptures. She is celebrated not only for her exceptional artistic contributions but also her lifelong advocacy for African- American’s equality within the Arts.

Savage was at the heart of the 20th century Harlem Renaissance, remembered as the ‘golden age’ of black art, music and literature.

The movement began due to the formation of a creativity hub of African American artists in liberal Harlem, New York, after their ‘Great Migration’ from repressive southern states.

Through her art and activism, Savage became an influential teacher to younger African-Americans and played a great role in shaping the careers of many of the Renaissance’s most prominent artists. Her creation of the multi-cultural establishment, ‘Savage Studio of Arts and Crafts’ in 1931 later renamed as the ‘Harlem Community Art Center’, in 1932, was fundamental to the Harlem Renaissance’s artistic advancements and would foster the development of 1,500 students.

For the remainder of her life, she continued to create groundbreaking work, such as her sculpture of a child from Harlem, Gamin, (1929) but what reinforced her greatest legacy and true masterpiece was the impression she left on her students.

A key impact, and one of many that the movement brought, was that Black artists have gained increased control over representations of Black culture and experience, which helped to later set the stage for the Civil Rights Movement. 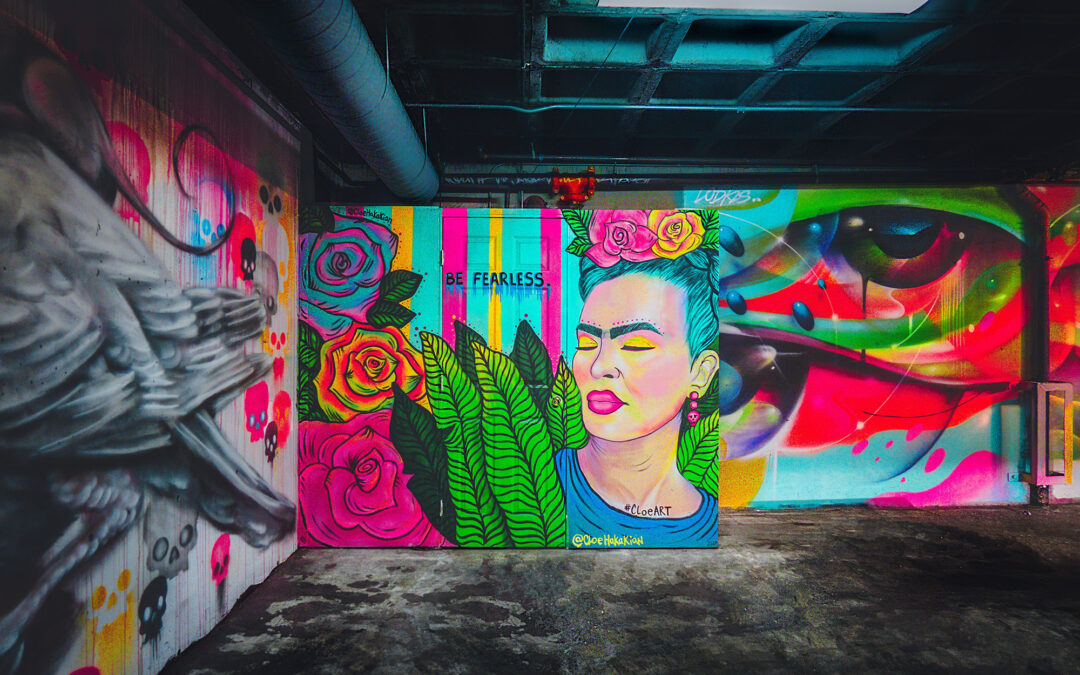 Frida Kahlo not just an artist

Great female artists have hardly been known in society because women in art have not been sufficiently researched, appreciated, or recognized by society despite their talent.

There are certain exceptions that women have been valued for their talent and their name has endured through history, such as Frida Kahlo.

Frida was a Mexican painter who was highly recognized for her art and expressionism, where she mirrored the dramatic events of her life that she remembered with great sensitivity. One of these events was an accident at the age of 18 that kept her at rest for a long time, the period during which she started to paint and express her thoughts and feeling through art.

Even though society has not previously valued the talent of other women unless they belonged to influential social classes, as is the case with Natalia Goncharova or Berthe Morisot, Frida Kahlo was recognized without belonging to an influential class, but for being a woman with revolutionary political ideas for the time. She was a popular activist and even participated in politics in the Communist Party, a great defender of feminism and the indigenous population.

Although her works were groundbreaking in expressing an image of a liberated, strong, and revolutionary woman, it can also appreciate a clear theme of sadness and pain.

A relevant fact was that in her first exhibition, she was ill, and the doctors advised her not to attend, but despite this, she installed a bed in the middle of the exhibition, where she rested, sang, and encouraged the exhibition.

Frida has been mentioned in musical works, paintings, and films such as the Red Hot Chili Peppers’ Scar Tissue, a song dedicated to Frida. Moreover, there is a museum dedicated to her, that is called Casa Azul Museo Frida Kahlo, exclusively with her paints.

In conclusion, Frida Kahlo has been one of the few women that society that has been recognized for her talent thanks to 47 years of life full of struggle and defense of ideas without fear of consequences or repression.

This website uses cookies to improve your experience while you navigate through the website. Out of these, the cookies that are categorized as necessary are stored on your browser as they are essential for the working of basic functionalities of the website. We also use third-party cookies that help us analyze and understand how you use this website. These cookies will be stored in your browser only with your consent. You also have the option to opt-out of these cookies. But opting out of some of these cookies may affect your browsing experience.
Necessary Always Enabled
Necessary cookies are absolutely essential for the website to function properly. This category only includes cookies that ensures basic functionalities and security features of the website. These cookies do not store any personal information.
Non-necessary
Any cookies that may not be particularly necessary for the website to function and is used specifically to collect user personal data via analytics, ads, other embedded contents are termed as non-necessary cookies. It is mandatory to procure user consent prior to running these cookies on your website.
SAVE & ACCEPT